When one says sportpesa jackpot we all immediately think of the endless possibilities in enhancing our existence on this earth if we were to win the one hundred plus million kenya shillings.

Sportspesa has fired up the hopes and dreams of Kenyans by providing an equal playing platform for anyone irrespective of who is your father,your gender,economic status,employment status,political affiliations and so on to play the odds and stand a chance to make more money than five previous generations of your keen.

Sportpesa jackpot is an offering by sportpesa which is the mammoth sports betting company in Kenya that entails correctly predicting a certain set of predetermined football matches in an effort to win millions of shillings while only investing Kenya shillings one hundred.It sounds like a ponzi skim if it were not for the evidence of the power of the jackpots with the likes of Abisai and Ogada who can now afford to buy a small island of the coast of mombasa.

The science of it is very interesting,you are given thirteen to seventeen foreign matches (if they were KPL matches tungeshuku) and are tasked to predict out of the three possible outcomes (a limited number of double chances are allowed at an additional cost) of win,draw,loss which will be correct and are then offered millions of shillings for your “hard work” and you are only required to show good faith with an meager investment of Kenya shillings one hundred.Can it get any better than that am sure even Hollywood would not be as creative in the creation of their blockbusters.

But is it really that simple,the answer is “no” evident with the fact that it has only been won thrice since its inception.The interesting bit which is greatly over looked by the majority of bet placers who invest thousands of shillings in the pursuit of money fueled happiness is that their have been multiples of hundreds more winners of the sportpesa jackpot bonuses than there are winners of the whole lot.

Wouldn’t common sense then dictate that the right boar to hunt and squire are the bonuses which as the common phrase state are the lower hanging fruits.

Ask yourself what would you do with two million Kenya shillings or six hundred thousand which were the jackpot and mega jackpot highest paid bonuses the week of February 19 2018 respectively.I certainly would be glad to have some extra change to straighten out my financial obligations.Playing the sportpesa jackpot smart is hedging your chances to increase your probability of cracking the bonus stratosphere and by some good luck you may just hit the mother load and make your neighbors envious by being picked from your house like a “bowssssss!!!!”

Get in the game is the famous slogan for the Sportpesa platform and it rightly embodies the attitude required if you are to successfully chase some wins while playing Sportpesa jackpots.”Get in the game” and work smart with a methodology geared towards optimizing your chances of winning some coins.

Multi bet Kenya offers value services that are backed my professional and strategic research geared towards increasing the ratio variant in favor of you.

How do we go about this?

Firstly we address the challenge as a statistical problem that we need to solve for the prediction of football matches is very possible with the use of performance based statistics of each team and the players constituting the team.

There are multiple variables that contribute to a team’s form meaning its ability or inability to win matches,score goals,defend against conceding to many goals e.t.c

Players that have played longest together inevitably cultivate great chemistry and in turn great form.Look at Leicester’s meteoric rise and its consistent fighting spirit.A huge part of this can be attributed to the fact that as they joined the EPL majority of the players had played together since the 2013-2014 lower leagues season and it was almost instinctual how they decimated the other so called EPL Goliaths.

Each season a team will either improve their form or deteriorate in performance and this plays a big contributor to their winning or loosing streaks. There are teams who can not shake of a loosing streak and there are those like the formidable Manchester united,Porto and Bayer Munich who cannot help themselves while there are those like west bromwich Albion who despite their best attempts seem not to be able to share off loss after loss. 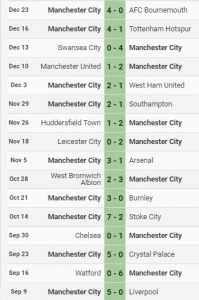 Call it myth superstition or whatever you want but there are some teams that despite their prowess they are always doomed to failure when playing that un defeatable rival.Look at Reims and Tours,despite the fact that Reims is considered a top tier french ligue 2 team and Tours a bottom tier french ligue 2 team they always have an extremely hard time in winning a match against tours.This is evident with the table below

An injury of anchor players such as messi,pogba,ozil and others usually throws the team in a bit of disarray and usually almost always impacts their capability to attack or defend.

Injury reports may provide some insight on how the teams will play during their next encounters and enable one to predict the possible outcomes.This information can be accessed on such sites

A comparative report indicating the previous encounters between teams provides insights on the possible outcomes of matches.The analysis has to be done for matches played over a number for recent form maybe misleading.

As an example lets take Juventus vs Atlanta,over the last four years Atlanta has never defeated Juventus and this indicates that it is almost inevitable that all encounters will be won by Juventus especially those where they are playing at home.

What the teams may gain or loose in the match?

This has been best demonstrated during the 2017-2018 English premier league season where the teams in the lower positions of the table have been out performing the top placed teams as they try to escape the relegation zone.This information can be accesses from such sites.

There are many more variables that as multibet kenya we consider to ensure that we provide bankable predictions on the sportpesa mega jackpot.Visit us here to enjoy our well researched tips

What can winning the sportpesa mega jackpot do for you?

Hypothetically if the mega jackpot purse was reset to kenyan shillings a hundred million and you happened to correctly guess the outcomes of the seventeen games and won.What would that mean for you?

No more paying rent,no more hustles in catching a matatu because you would be in a position to drive a modest car of your choice,no more worries about KPLC,NWSC,GOTV,ZUKU bills and most importantly no more putting in twelve hours a day to earn peanuts.

With KSh 100,000,000 (look at that beautiful almost enchanting figure) you would be in a position to never ever work in your life and if by the mercies from above you happen to win that OGADA money,am talking about ksh 231,000,000 (i can almost cry looking at that figure) you definitely do not need to work ever again.

With that kind of money you only need to buy the best financial advise in the market on how to take advantage of financial instruments such as treasury bills and bonds to generate substantial interests.

If you were to invest only ksh 50,000,000 from your pool of cash on treasury instruments you would be looking at in excess of ksh 4,000,000 in yearly interests that is ksh 330,000 per month to live on while still maintain your principle amount…..why work again ever….

Just look at how easy leading investment entities such as Cyntonn Investments and ICEA Lion make it look to convert your already a lot of monies into tycon level monies.

Betting has its related risks and it is always advisable to never risk or stake money that you cannot afford to loose and so we urge all our fellow prediction enthusiast to always bet smart but not to gamble.